Bayer Leverkusen assistant coach Hendrie Kruzen has opened up about his time as number two at Borussia Dortmund, and says the club tried to sign Matthijs de Ligt in 2017.Kruzen has been assistant to Peter Bosz at Maccabi Tel-Aviv, Ajax, Dortmund and now Leverkusen, with the pair’s tenure at BVB cut short after just five months at the helm having taken over from Thomas Tuchel.And in discussing what went wrong, Kruzen suggested that too many players did as they pleased and that a failure to be able to recruit effectively didn’t help the situation. Article continues below Editors’ Picks What is Manchester United’s ownership situation and how would Kevin Glazer’s sale of shares affect the club? Ox-rated! Dream night in Genk for Liverpool ace after injury nightmare Messi a man for all Champions League seasons – but will this really be Barcelona’s? Are Chelsea this season’s Ajax? Super-subs Batshuayi & Pulisic show Blues can dare to dream He told Goal and SPOX: “Back then, at Dortmund there were too many players who lived in their own world a bit. If too many players think they can do what they want, you have no chance as a coach.”Maybe one [the club] should have kept a little more calm. They [the Dortmund hierarchy] saw that the style they wanted to play could work [under Bosz and Kruzen], especially after the great start. Of course, there were also personal reasons.”When Lukasz Piszczek got injured we had to make a lot of changes in the defence. Maybe we should have pushed for a high-profile new signing that summer.”Unfortunately, when we had that difficult phase, as is often the case in professional football, we did not have the time to sort it out and to get new players in in the winter.”We were already in talks with some of them, and those players were of a high calibre even for a club like BVB. I don’t know whether they would’ve definitely signed or not but one of them went from Ajax to Juventus for a lot of money this summer.”Kruzen also spoke about the future of Leverkusen star Kai Havertz, who has been strongly linked with a move to several top European clubs. 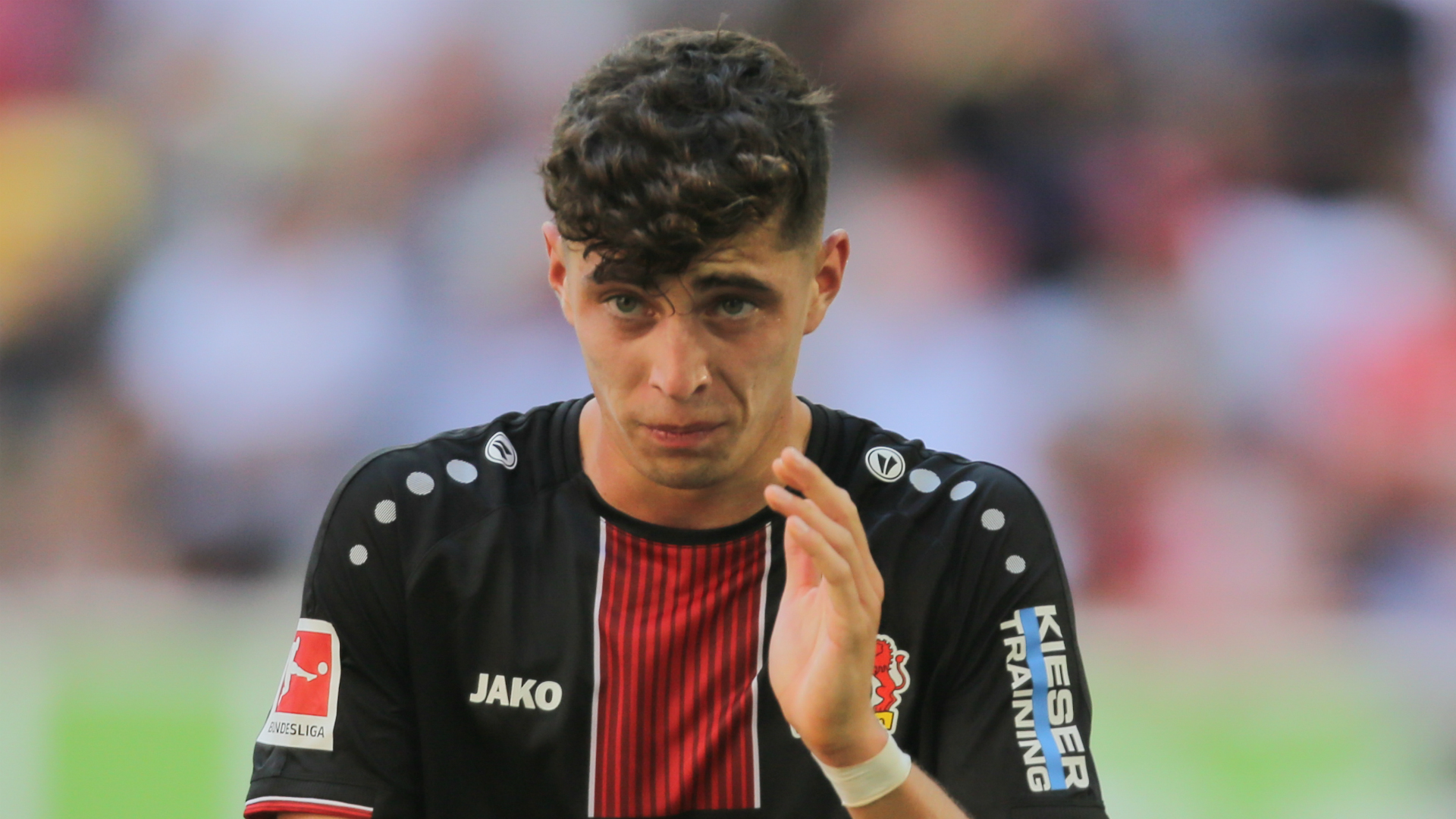 The 20-year-old midfielder scored in his side’s opening-day Bundesliga victory over Paderborn and Kruzen accepts that he’s likely to move on to one of the elite sides in the future.He said: “I think Kai is definitely a player for the big clubs [to look at signing] in the future. He has a lot of talent and has everything for an outstanding career.”He scores goals, assists them and can handle the ball very well. What he can still improve on is the defensive phase, the transition – that he doesn’t just stop but goes straight back. But he will also learn that.”He has to become more of a leader this year and to take on greater responsibility. If he plays as well as he did last season, then the chance he’ll leave isn’t any lower. That would be fine, because then maybe he would take the next step in his career at one of the very big clubs. But let’s see – in any case, Kai feels right at home with us at the moment.”And on whether or not Havertz is the best player he’s ever coached, Kruzen added: “One of the best, yes. But I would also name Hakim Ziyech, Frenkie de Jong and Matthijs de Ligt at Ajax in this context. And it is a pity that we could not work with Marco Reus at Dortmund because he was injured. “He and Mario Gotze loved our style of play. These are all players who think not only about the next pass, but also the next situation in the game before they even get possession of the ball.”

As I prepare to attend the next meeting of Canada’s Premiers, I’m reflecting on what is accomplished when premiers come together. I’m sometimes asked if it these meetings are useful and how they benefit Nova Scotians. As chair of the Council of the Federation, over the past year I have worked with premiers to improve on issues that are important to Nova Scotians, including health care, jobs and the economy. A very tangible example of what we achieve by working together is the millions saved through the premiers’ generic drug initiative, work that began last July in Halifax. This initiative will save taxpayers up to $100 million – money that can be directed toward important programs and services for Canadians. This past September, I led premiers and businesses on a trade mission to China. It was an important opportunity to advance Nova Scotia’s relationship with key Chinese government and business leaders. Together with business and post-secondary leaders I promoted Nova Scotia’s unique offerings in education, training, transportation, the Atlantic gateway and research and innovation to growing Chinese markets. Our focus on increasing trade, growing the economy and creating jobs continued as Nova Scotia hosted the Premiers’ International Economic Forum in November, where former Bank of Canada Governor Mark Carney provided an update on the outlook for the global and Canadian economies. During that meeting, premiers discussed the critical factors to ensuring continued job growth and economic prosperity. Recently, I’ve been meeting with businesses, students, apprentices and industry to get their views on how to maximize opportunities for Nova Scotians in the area of skills development. This issue is at the forefront as I head into the next premiers’ meeting, particularly with the upcoming renegotiation of federal/provincial skills and labour market agreements, as well as the recent federal announcement of the Canada Job Grant. Premiers are collectively asking whether a unilaterally imposed federal “solution” makes sense for provinces with unique private sector needs. To date, provinces have not been consulted on the design of this program. We don’t know exactly what this means for Nova Scotians because we haven’t been invited to discuss the details. I hope this will change. What I do know is that businesses will be expected to share the cost of this program, raising concerns that small to medium-sized businesses, like many businesses in Nova Scotia, will not be able to afford to participate. Atlantic Premiers have already voiced our concerns to the federal government about the jobs grant, as well as unilateral changes to the Employment Insurance Program – changes we believe are harming the livelihood of workers and businesses that rely on a seasonal economy. We have commissioned a study to better understand the impacts of EI changes and I’ll update premiers on this work. While we recognize changes may be needed, these programs must work for people in all parts of the country. While with my colleagues, I’ll also share information on the Atlantic Workforce Partnership, an initiative that is making Atlantic Canada a national leader in the reform of apprenticeship and training programs. We are strengthening apprenticeship to make sure Atlantic Canadians can gain the skills they need and we have a well-trained workforce to support our growing economy. Nova Scotia is on the verge of unprecedented economic opportunities. Working with other provinces to improve skills and jobs programs is all part of making sure people are ready for the jobs coming from major projects, like energy transmission, ship building, and offshore energy. I have been proud to serve as chair of the Council of the Federation, and I am very pleased with our achievements and progress. I look forward to continued collaboration with my fellow Premiers in the best interests of Nova Scotians and all Canadians. -30-

“She was always meticulous and careful in everything she did, and though she was killed in a tragic accident, it was doing something that she loved,” Mr Clarke-Sullivan added.Mr Ziegler, a married father of two children aged eight and five, lived in east London with his wife, Victoria, 43, who became concerned at his whereabouts when he missed his flight home on Sunday.The 43-year-old was born in Surrey before he attended the Oxfordshire boarding school, Radley College, and later studied law at the London School of Economics.In a statement released yesterday, Mrs Ziegler said: “Matt was very much loved by all of us, his friends and his colleagues.“We want to say thank you to everyone who has sent their condolences and offered their help. This is obviously an extremely sad and difficult time for us, so we thank you for respecting our need for privacy so we can try and deal with our loss.” Described as “a very experienced backcountry skier and climber” by her husband, Ms Clarke was the first New Zealand woman to have climbed and skied the three highest peaks in Greenland. Want the best of The Telegraph direct to your email and WhatsApp? Sign up to our free twice-daily  Front Page newsletter and new  audio briefings.

Two Barclays Bank lawyers who were killed in an Italian avalanche “died doing what they loved”, their families have said. Katherine Clarke, 39, and Matt Ziegler, 43, were both corporate lawyers and were skiing in a valley near the resort of Courmayeur, in the northern region of Valle d’Aosta, when they were killed alongside two other victims on Sunday afternoon.They are understood to have been on a skiing trip with colleagues when the fatal incident took place.Ms Clarke, a mother of one originally from New Zealand, lived in London with her husband, Jim Clarke-Sullivan, who she was due to celebrate her ninth wedding anniversary with today.Mr Clarke-Sullivan said his wife will “be missed beyond words”, adding: “Words cannot describe the loss we feel after Sunday’s accident. Katherine was an amazing mother who loved our daughter, Isla, very deeply and was completely devoted to her.“I have so many stories to tell Isla about her mum, who was always brave, always calm, bright and happy.“Katherine had an adventurous spirit which found its home in the mountains.” New Zealand national Ms Clarke, 39, who lived in London, had gone skiing on Sunday in the Veny valley near the ski resort town of Courmayeur when an avalanche occurred Credit:PA read more